Beethoven's Piano Sonata in E-flat Major, Opus 31. No. 3 - The Hunt. This was his last work from Opus 31, completed in 1802 and published the following year by Hans Georg Nägeli.

Movement I of the Piano Sonata in E-flat Major 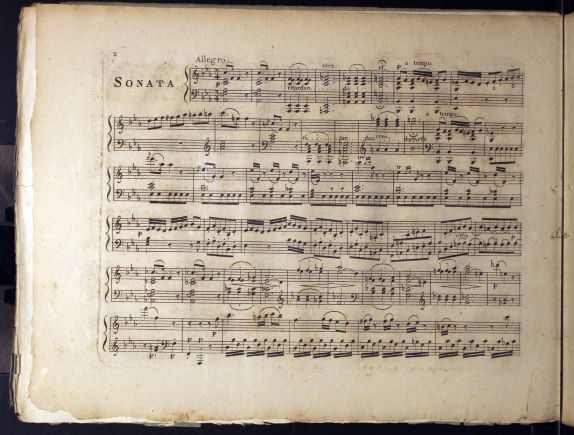 Beethoven's Piano Sonata in E-flat Major Opus 31. No. 3 breaks the mold for the sonata form of the era. This work features four movements, contrary to the typical three movements of a standard sonata, and does not include a slower middle movement. The opening statement of movement one begins with a gentle yet haunting call to draw the audience's attention. This three-note theme, dubbed The Hunt theme by many, mimics a hunting horn call. Beethoven strays from the typical bright and flashy opening to a solo piece, and brings the audience close with this inquisitive call and response between the three-note motif and the subsequent bass chords. This repeated question is never fully resolved, as the work twirls through dark yet elegant undertones and pushes the boundary of the sonata form. Beethoven's progressive harmonic language flourishes throughout the opening movement and subsequent movements of this piano sonata, wrapping up his first major period in his career as a composer.

Beethoven's compositions from this period were heavily influenced by his mentor Haydn as well as other composers of the era. Most notably, the improvisatory style and harmonic colors of the first movement are reminiscent of the late C.P.E. Bach. The development of expressive harmonies in Beethoven's sonatas may have also paved the way for later composers. As H.A. Harding points out, the chord in measure thirty-six of the opening movement (ii7 of the parallel minor) is nearly identical to the famous Tristan chord discovered by Wagner nearly fifty-five years later.