Burney, A History of Music: Notes of Interest

Links to PDFs of the whole item:

Excerpt Page of "A History of Music" 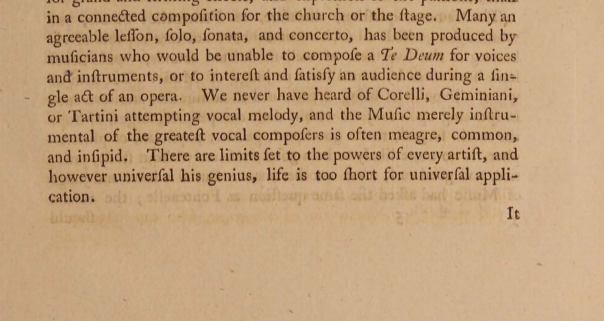 [Option to add another image here]

This excerpt shows how most texts were printed. Archaic spellings are used throughout the text, such as the “long s.” In many eighteenth-century English writings, the letters s and t were represented by a single character. The printing process was achieved through moveable type, and musical examples were glued onto the paper. This made publication more of a monumental task, especially for a single author. Another interesting practice was previewing the next page at the bottom, shown in this example. This was done to line up the pages correctly during printing.

The item serves as a unique look into how musicologists (or at least, Burney) would have viewed the progression of music up to that point. Simply from looking through the table of contents, one can see how the chapters are organized differently than a present-day textbook. In Burney’s text, the chapters are separated by the ruling English King or Queen of that time. This shows that making this accessible for an international audience was not a priority, whereas textbooks now would likely try to be as universal as possible. There are also many examples of “purple prose,” as Burney waxes poetically on many examples contained in the book. He shows definite bias toward certain artists, which the passage of time has made even clearer today. These issues are discussed further in the page “History and Criticism.”