Burney, A History of Music: History and Criticism

Purple Prose in "A History of Music" 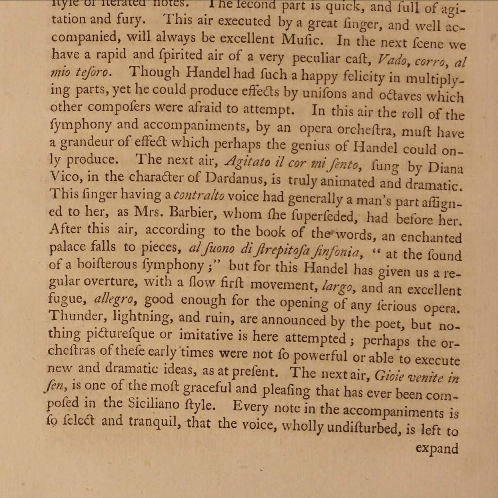 The Bureau of Labor Statistics describes on their webpage that the job of a historian is to “present and interpret history in order to inform and build upon public knowledge of past events.”  In these books, Burney presents history in a way that fits a more novel-like writing style, and he also makes a point to inject his own personal opinions of certain pieces and people in music.  Burney’s audience was certainly not an audience of students in a classroom setting.  In fact, his audience was a multitude of people who subscribed to his books as he wrote and published.  In this way, while Burney was a historian by researching historical events and presenting them through his books, he was also a sort of critic of music, injecting historical tangents about composers and music with his own personal criticisms and praises of the music being written.  This goes past the point where historians “inform and build upon public knowledge of past events” and shows how history in the eighteenth century was much more of an opinion piece than an objective interpretation of historical events like textbooks are now.

A prime example of this type of “purple prose” that is used in Burney’s writing is how he speaks about Handel.  In Volume Four, Burney enthuses, “[Handel’s] air, Gioie venite in sen, is one of the most graceful and pleasing that has ever been composed in the Siciliano style.  Every note in the accompaniments is so select and tranquil, that the voice, wholly undisturbed, is left to expand in all the tenderness and expression which the air itself excites.”  This is just one example of how Burney blurs the line between history and criticism in his writing, whereas today, a common textbook such as A History of Western Music, only talks about Handel in terms of his compositional technique, to show the importance of the composer and his work.  For example, A History of Western Music states “Handel, recognized since his own time as one of the greatest composers of his era, was a master of all types of vocal and instrumental music.”  While this does posit some subjective claims, flowery language is not used to elevate the importance of the music.  There is no obvious personal opinion like there is in Burney’s writing.  While Burney’s writing would not be used as a textbook today, it is an interesting piece to look at to see what historical writing was like in Burney’s lifetime.