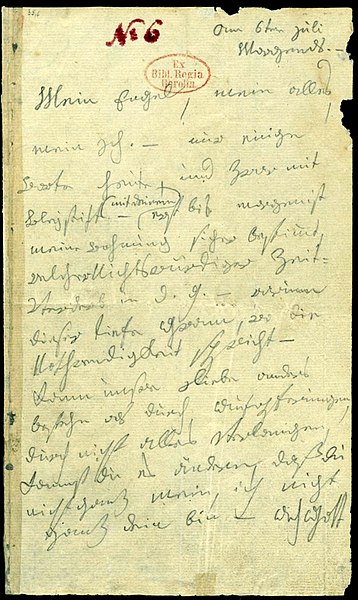 This specific concerto was dedicated to Princess Barbara Odescalchi (nee Countess von Keglevics), a piano student and possible admirer of Beethoven's. It is not entirely clear what her specific role in Beethoven's life was, but we do know that Beethoven dedicated several other works to her (Piano Sonata in E♭, Op. 7, 10 Variations on the duet from 'La stessa, la stessima' from Salieri's opera Falstaff, WoO 73, and the Six Variations, Op. 34). If he was trying to woo her with these however, it did not succeed. Whether it was attributed to his coming to piano lessons in his pajamas or a discrepancy between the classes, she was married to Prince Innocenz Odescalchi soon after.

What particularly draws our attention to her, however, is the possibility of her being Beethoven's Unsterbliche Geliebte, otherwise known as the Immortal Beloved. If this were the case, then it would be especially tragic, since "Babette" died in Vienna in 1812, a year after Beethoven wrote the letter. Perhaps it was not initially sent because of the taboo that would arise, but ultimately because he no longer could.

If you would like to know more about the Immortal Beloved, visit this page: https://lettersofnote.com/2011/06/10/immortal-beloved/.