This national business honor fraternity is a member of the Association of College Honor Societies. The two-fold purpose of the honorary is to promote higher scholarship in training for business and to recognize and reward scholarship attainment in business subjects. Each spring, the honorary publishes the Delta Mu Delta Journal of Economics and Business, which is composed of the outstanding papers submitted by students and faculty of the department.

Baldwin-Wallace's chapter of the national German fraternity, Delta Fhi Alpha, is a youngster on the campus. Last year, "Minna von Barnhelm" was presented and this year, among other things, a puppet-show and a contest for outstanding work in German were undertaken.

Membership in the association is by election, and candidates must have at least two years of German, and a high scholastic average both in German and as a general record. Irene Ogrin is president for the year.

The purpose of Delta Phi Alpha is to discover and develop an interest in the many cultural, scientific, artistic and musical contributions made by the Germans throughout the centuries.

Edna Loesch made a natural leader for the group, and as president, she arranged with Dr. Ficken, the advisor, the annual ''Kaffestunde.''

The national Spanish honorary for superior Spanish students was established on B-W's campus in 1937. The purpose of the group is to promote wider knowledge and greater interest in the Spanish language and the Spanish-speaking countries. Dr. Mercer is the Faculty Advisor. 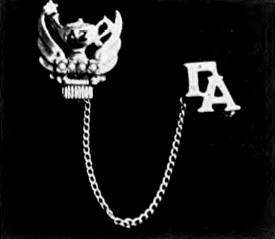 The original Afo-Ofa (All for one ... one for all) Club was organized in 1935. In 1936, this group formed the local sorority, Phi Lambda Chi. On December 12, 1941, both actives and alumnae of this local sorority were initiated as charter members of the Gamma Alpha chapter of Delta Zeta.

*No content currently exists for the Greek Life - E & F. Check back again.