*No content currently exists for the Alumni - I & J. Check back again.

Listening to Bill Kelso '63, talk about his discovery of the original Jamestown fort, is like listening to an exuberant youngster talk about a long wished-for Christmas Present. But Kelso's gift was 30 years in coming and is important, not only to him, but to the world as well.

Kelso is the director of archaeology for the Association for the Preservation of Virginia Antiquities (APVA) and since he and his team began excavating the Jamestown site, they have uncovered myriad evidence of the original settlement which, for 200 years, had been thought to have washed into the nearby James River.

Why did Kelso keep looking for the site when everyone else said it was gone?

"I don't listen," he said laughing. He had thought about the Jamestown site through the years since he first stumbled on it while a student at B-W.

"I was in the library studying for exams," he recalled." Taking a break, I started looking at old magazines and found one which had photos of an archaeological excavation in Jamestown in 1957. My first reaction was that I was sorry it was over and I couldn't be a part of it." That incident was filed away in Kelso's mind.

At the urging of Robert Kruden, a history professor who had inspired him, he went to William and Mary to pursue a master's degree in early American history. While there, he visited the Jamestown area and asked a park ranger where the first fort was.

"Still, I focused on it," Kelso said. "The first and oldest is always what you focus on," ... and Kelso just had a feeling about the area.

"I wanted to try," he said. "I was willing to look like a fool. I thought that if someone had come across it (the original fort) they might not have recognized it."

Kelso's reputation as an archaeologist grew. His first dig experience was as a volunteer but by 1976 he was appointed state commissioner of archaeology in Virginia. In 1979 he became the resident archaeologist at Monticello where his discoveries completely changed the ideas about how the slave community there lived. Still, he never forgot Jamestown.

Finally things came together. The APVA, which owned the land, was interested, after years of reluctance, in another excavation and Kelso had the opportunity to lead the effort. In the spring of 1994 Kelso found a pottery shard the size of a quarter at the site. It had a distinctive green color which matched pottery he had seen in an English museum just weeks before. That piece had come from a ship that sank off the English coast in 1545. Kelso knew he was on the right track.

Since then the excavation has produced a real bonanza in artifacts. The pit/well, the first major feature investigated by the team, yielded over 44,000 objects including the earliest collection of English objects yet found in America, many dating from the 1590s. Also found were a palisade line (80 feet of an upright side-by-side log barrier) and a series of early 17th-century ditches.

One barrier to finding the fort was that many of the building materials used had rotted away. That's where Kelso's experience with the archaeology of the landscape and gardens was valuable. In an archaeological study of the grounds at Carter's Grove Plantation, he helped to discover and map an elaborate garden buried next to the house.

How does one excavate a garden when there is no hard evidence, no metal, no pottery?

"Whenever someone disturbs dirt, it can never be put back to its original condition," Kelso explained. "You leave 'footprints.' There is a drawing of the plan of a garden underground. All you have to do is uncover it." He concedes that uncovering that "map" may not be quite as easy as it sounds. Fortunately Kelso is an enthusiastic archaeologist, a visionary who keeps digging.

Kelso's original charge was to find some clues to Jamestown's founding in time for the 400th anniversary in 2007. The team is already about a decade ahead of schedule. On September 12 the APVA announced the fort's discovery to the world. The story made headlines and Kelso appeared on NBC's Today Show to talk about the excavation. Then he went right back to work. It seems hard for him to stop and talk about his work because he's so interested in just doing it.

"Watch what you do," said the consumate detective with a chuckle, "because an archaeologist might discover it someday."

For more information about the Jamestown discovery, look for the APVA web site at http://www.widomaker.com/~apva/

Besides Dayton Miller, B-W has another claim to science fame in Dewey Knowles, inventor of the Knowles Gridglow relay tube, more commonly known as the electric eye that automatically opens and closes doors.

Dewey DeForest Knowles graduated from Baldwin-Wallace in 1922 and worked as manager of the electronic engineering department at the Westinghouse Electric Corp. in Bloomfield, New Jersey since 1941. He first joined this research staff in 1924 and worked as a research engineer, head of the gaseous conduction section, and in electronic investigation.

The Raytheon Products Corp. claimed Dewey from 1937-1939 as he directed their research and products engineering. After this work was completed, he worked again at Westinghouse developing ultra-violet sources and sterilamps and managing the special products engineering department.

Knowles is listed in “American Men of Science” and is credited with pioneer work in voltage regulation and industrial controls, arc initiation, vacuum techniques, phototubes, ultraviolet lamps, electrical circuits, thermionic emission, gaseous conduction, and electronic tubes. In 1950, Dewey was concentrating on government contracts for the armed services on the development of electronic tubes used in radar.

Dewey and his family live in Verona, New Jersey. 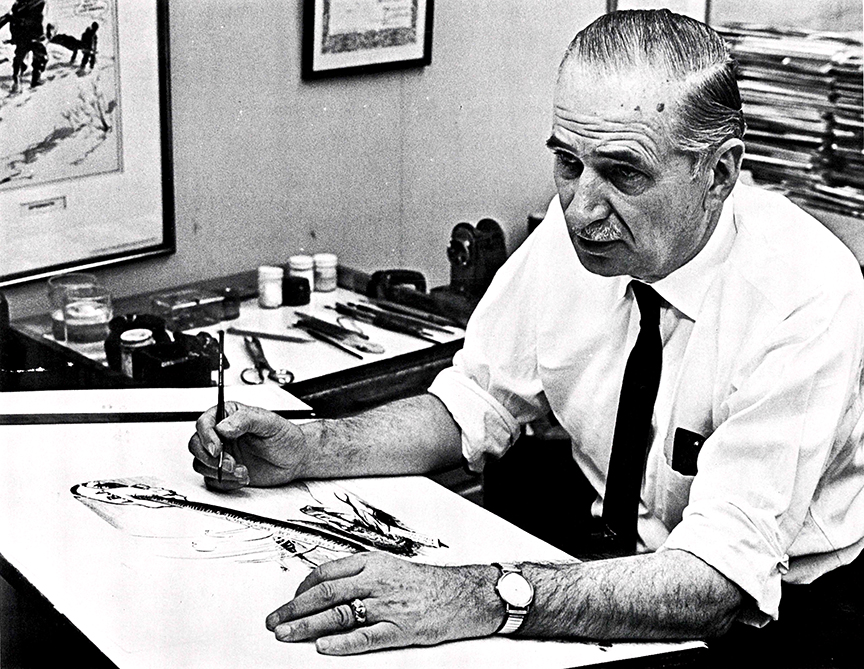 Creativity is the stock in trade of Pulitzer Prize-winning Edward D. Kuekes '22. This widely acclaimed artist has put his considerable talents to use for the Plain Dealer for 43 years, and for the last 15 years, as chief editorial cartoonist.

"An editorial cartoonist is a graphic editorial writer," Kuekes said about his work. "I try to say seriously what I think, and try to say it in a daily drawing. The editorial cartoon is the best vehicle for opinion - it is the pin prick that unstuffs a shirt - it is the sermon that gives pause for reflection. A political cartoon is a weapon of criticism, scorn, satire; and ridicule is the atomic bomb of my profession."

Devotion to his craft has brought many rewards to Ed Kuekes. Topping the long list is the Pulitzer Prize, the most coveted award, which was presented to him in 1953 for "Aftermath" as the best newspaper cartoon of the year. In 1949 he won the first of many Freedom Foundation Awards - the $2000 first prize.

It has been said of cartoonists that anyone watching these artists at work will agree that it's the most grueling of professional grinds. More than most creative workers, they have difficulty getting started, even after they have settled on an idea. For, every cartoon has a dozen or so approaches, and often the cartoonists stew in their own juices until they strike their own gait - and often they make innumerable drafts before hitting upon one they like.

Throughout the years Kuekes has had to be able to change perspective as the paper's administration underwent changes. Under the leadership of dynamic Thomas Vail, the publisher and editor, Kuekes as editorial cartoonist is working very closely these days with the editorial writers. As a result, the Plain Dealer is making new impact on the Cleveland newspaper scene.

Greater than wide acclaim, Kuekes gets satisfaction from hitting upon the exact analogy to interpret a "thorny" subject in a cartoon. Then he is a reporter telling his graphic story.

But he is honored that five Presidents have requested his cartoons: Hoover, Eisenhower, Truman, the late Mr. Kennedy and Johnson.

He and his wife, the former Clara Gray '19, have two sons, George C. '50 and Dr. Edward G. '49, and four grandchildren. Their North Olmsted home is a brick and stone ranch on five acres with two lakes.

By way of hobbies, Kuekes is an amateur magician and a bell ringer. A few years ago he and Clara developed an act to present to groups, "The Family Album," where he sketches on a mammoth easel the characters she talks about. Memorable trips to Hawaii, Europe, the Caribbean and Scandinavian countries have been chronicled in many a cartoon.

The winner of the 1953 B-W Alumni Merit Award, he was president of the Cleveland group in 1947. On Founders' Day in 1957 his Alma Mater presented him with an honorary doctor of humane letters degree.

Students and faculty at Baldwin-Wallace were shocked and sorely saddened by the news that reached the campus recently of the death of U. S. Naval Cadet Stanley Kulwicki, '42. He was killed on May 4 in a plane crash that occurred while completing his training at Norman, Oklahoma.

"Cookie" or "Stash" as students knew him, was a native of Cleveland where he attended St. Stanislaus Parochial School before graduating with honors from South High School. In the athletic records at Baldwin-Wallace his name will go down as one of the outstanding players of the years, revealing marked ability in football, basketball, and baseball. On the gridiron he was an expert passer, keeping his poise under the most trying conditions. He won letters in both football and basketball for three consecutive years and was chosen by his team mates in 1941 as honorary captain of the football squad. His was a record, not so much of points scored, as of excellent work in the pinches. His accurate pass in the final minute of play changed a seeming tie into a victory on one occasion. His plunging through the line assisted greatly in one of the glorious occasional wins over Western Reserve. Reserve was his victim al so in basketball when he came through at the crucial moment with the points that won the day.

A great favorite on the campus, Stanley had greeted friends here only a few weeks before his fatal accident. He entered the service in October, 1942, and attended flying school in Iowa City, Iowa, and Olathe, Kansas, before being transferred to Norman, Oklahoma.

The service in his honor was largely attended by neighbors and friends, his pastor paying him a well-deserved tribute.

Tonia graduated from Lakewood High School in Ohio before pursuing higher education at Baldwin-Wallace College. In 1993, Kwiatkowski made the U.S team for the World Figure Skating Championships, held in Chiba, Japan. She earned a place on the Dean’s List and a degree in communications and psychology in 1994.