On what is now Marting Hall's from lawn was located Wallace Hall, built in 1854. It housed the German and Commercial Departments, contained recitation halls, and housed the Literary Societies of German Wallace College. The Literary Societies were the beginnings of our present fraternities and sororities. They were: Germania (Phi Kappa Tau), Scholler (Lambda Chi Alpha), Goethe (Alpha Sigma Phi), Bettina (Alpha Phi). Wallace Hall was razed in 1896.

Editor's Note: Conflicting dates for the construction of Wallace Hall are presented as they were reported in the original source material.

Ground was broke for the Home Economics building on October 19, 1950. Mrs. Bauer of the Home Ec. Department and Mrs. Ethel Tudor, former head of the department participated in the ceremony. It was built on north campus near the southwest side of the Fullmer Arboretum and south of the observatory. The dedication for Ward Hall was held on Founder's Day, Thursday, October 18, 1951.

Designed by the Berea architectural firm of Mellenbrook, Folley, and Scott, it was built at a cost of $100,000. It is a one-story building and is 7 4' x 122' in dimension. Its block and brick veneer was built to match the Burrell Memorial Observatory. The building contained three major laboratories for crafts, clothing, and foods. It also included two classrooms, two offices, and a spacious living-dining center. The building was the most modem facility for teaching, practice, and demonstration of home economics in northeast Ohio. It continues to be used for classes for what is now called family consumer science and also nutrition.

The department was in need of a new facility after 39 years of growth. The department still maintained the second floor of the Home Economics beside Hulet Hall as a home management house.

Ward Hall was named in memory of Reverend Jacob Ward (1789-1869), pioneer Ohio Methodist and member of the Ohio State Legislature. It was made possible by a gift from the estate of Mrs. Henry Pfeiffer and smaller amounts from the alumni Loyalty Fund.

The ground was broken on October 10, 1891 for Recitation Hall on the Baldwin University campus. The cornerstone was laying was held on Founder's Day, Tuesday, October 13, 1891. The contractor wanted to begin work on Monday, so the groundbreaking was moved up to the 10th . The ceremony was conducted by Dr. E.J. Stubbs, President of Baldwin University. Mrs. John Baldwin, widow of founder John Baldwin, assisted her son John Baldwin, Jr., in breaking the ground for the first building in the new campus. Recitation Hall was dedicated on June 8, 1893. The site on the comer of Front St. and Bagley Rd. was bought by citizens and donated to the University after the old campus was sold to the Cleveland Quarry Co. The name was changed to Wheeler Hall in 1915, in honor of Dr. John Wheeler, President of Baldwin University from 1855-1870.

The building was built at a cost of $10,000. It was constructed of Berea sandstone and had three stories in addition to a basement. The total floor space was 21,000 square feet. The interior woodwork was constructed of Red Oak, Georgia Pine, and Cherry. The nine classrooms were capable of seating 400 students, with 260 in the chapel, or assembly room on the third floor, and 100 in the Y.M.C.A. room. The administrative offices were housed on the first floor and the first pipe organ in Berea was located on the third floor which was used from 1894 to 1914. The assembly room was used by the Baldwin University School of Music, under the direction of 0. E. Weaver for quarterly concerts dating back to 1899. The entire building was heated and ventilated by the Smead system and was lighted by electricity.

An interesting traditional event of Class Day during Commencement Weekend began in 1904 and lasted until 1927. The graduating class gathered around Wheeler Hall to have the last two numbers of their year carved on a brick on the wainscot, about six feet from the ground. The numerals 04 to 27 are still clearly visible on the stone around Wheeler Hall.

After Baldwin University and German Wallace College united in 1913, the south campus became the home of the Liberal Arts Departments and Wheeler Hall housed the departments of biological, zoology, botany, geography and geology, mathematics, and the modem languages. It contained seven laboratories, five classrooms, a greenhouse, and five offices. In 1966, the science departments were moved to the new Life and Earth Sciences Building and in 1991, the Department of Foreign Languages and Literature was moved to the newly-renovated Dietsch Hall. In recent years, it also housed the AudioVisual Department and American Language Academy.

Wheeler Hall was the fourth in a series of five campus buildings to be renovated, including Marting Hall, Lindsay-Crossman Chapel, Dietsch Hall, while Carnegie Hall will be renovated in the next few years. The design firm of Van Dijk Pace Westlake undertook the $1.8 million project, and Gene Reaser, Inc. was the contractor. The work began in December 1993 and was completed for the start of the 1995 Winter Quarter. The renovation brought the building up-to-date, while maintaining the historical architecture and beauty of the building. A second staircase, a grade-level accessible elevator, and a new heating and ventilation, and lighting were the focus of the interior. Classrooms, offices, and the basement were also updated and redecorated. The basement was updated to include a computer lab, an education resource center, and an audio-visual center for teacher training. New windows were installed, dormers were added and the entire roof was replaced. The sandstone also received a facelift. After the renovation the Division of Education was moved to Wheeler from Carnegie Hall.

Wheeler Hall was rededicated on Saturday, September 23, 1995. At that time, the Amelia and Clara Harding Center for Teacher Education was dedicated. 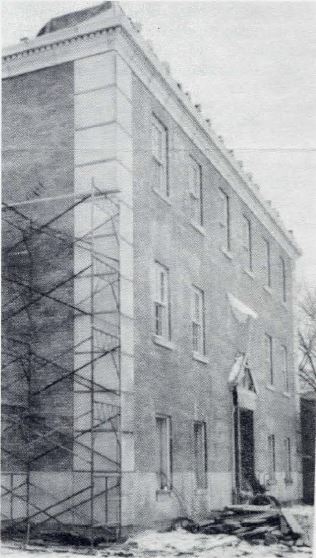 The groundbreaking for Wilker Hall was held in October 9,1959, with Dr. and Mrs. Wilker as guests. The building was completed in time for fall classes in 1960. The hall was dedicated on Sunday, October 23, 1960. The $800,000 science building was constructed by the Gillmore-Olson Co. of Cleveland. It was built on Front Street, north of Bagley Road, and directly north of Wheeler Hall. The hall was built to provide new facilities for teaching and research in the fields of Chemistry and Physics. It was the seventh building to be completed in the Baldwin Wallace Development Program, initiated in 1957.

Wilker Hall was dedicated in memory of Professor Victor Wilker and Carolyn Schultz Wilker, by their son, Dr. Arthur V. Wilker donated $500,000 to the construction of the building. It was the single largest gift the college had ever received. For forty-six years, between 1873 and 1919, Victor Wilker was a professor of modern languages at Baldwin-Wallace. He was also well-known author. The adjoining Wilker Hall was named in honor of Mrs. Wilker's parents, Dr. and Mrs. Thomas McKelvy. Dr. McKelvy was a well-known physician in Berea. Dr. Arthur Wilker was a 1906 graduate of B-W and received his master's degree from the college a year. Following a career as a professor of Chemistry at the University of Evansville and Baldwin-Wallace, he joined the National Carbon Co. where he eventually became president and them vice-president of the parent co., Union Carbide Corporation until 1958. He was a B-W Trustee since 1925, and was elected trustee-at-large in 1953.

Completion of Wilker Hall, Baldwin Wallace's new science building, is set for the fall of 1960 and progress reports indicate that the target date will be met.

Weather conditions in the Cleveland · area during the winter have been mild and construction officials state that this has had much to do with the progress.

About 85% of the exterior of the building has been completed since construction began last October.

The building, which is 70 feet by 142 feet, covers 35,000 square feet and this does not include the 200-seat adjoining auditorium, McKelvey Hall.

McKelvey Hall, in addition to serving as a lecture hall, will have facilities for physics and chemistry demonstrations as well as facilities for film and slide presentations.

The first floor, or ground level floor, of Wilker Hall will have equipment rooms, receiving areas, shops and a physics laboratory.

Departmental and faculty offices as well as conference rooms, a science library, and classrooms will be on the second floor of the colonial-styled building.

The third floor of the $800,000 structure will have laboratories for research, general chemistry, and stock rooms.

Summer utilization of the building has been taken into consideration and plans call for the air-conditioning of classrooms, offices, and the auditorium.

The gymnasium was built in 1911 with Berea sandstone. It was located on Beech Street near south campus. It served as the gym for men and women until 1949 when the Men's Gymnasium was built. However, most men's basketball games were played at the O.N.G. Armory for several years before the new gym was built. The building was used for the physical education classes in addition to athletics. It has a seating capacity of 225, with a wood court, and a running track above. The building has 14,600 square feet of feet of floor space. It was built by the Higley Construction Co. of Cleveland.

In 1950, the Women's Gymnasium was renovated due to inadequacies. The project costing approximately $10,000 made the building better equipped for women's classes and recreation. The building was cleaned, better lighting was installed, and the heating was improved. The girls shower room was improved and a separate room for drying swimsuits was provided. Classrooms, storage rooms, and offices were made into one locker room. The pool was also redecorated along with the men's pool locker room.

The pool was closed in the Winter of 1977 because of energy shortages and increased costs of heating the facility. When the Recreation Center was completed in 1986, the gymnasium and pool were no longer used for athletic purposes. The building was renovated in 1990 and is now the Student Activities Center. The pool has remained empty and is used by the Outdoors Club and Health and Physical Education Department as an Archery Range.