In August, 1859, the German Verein Literary Society was founded on the campus of Baldwin University. It began with seven members. The main object of the Society as stated by the constitution, was to give the members an opportunity to perfect themselves in the art of public speaking. Both English and German were used, although the use of the German predominated at that early date. The meetings were held weekly in the chapel of Baldwin Hall. On October 27, 1859, the first program was arranged for the first literary meeting, to be held one week later. The program consisted of one essay, two declamations, and a debate. Thus each member had a part on the program. During the early years, while the membership of the Society was small, every member participated in the literary program at every meeting.

When Baldwin University and German Wallace College united to form Baldwin-Wallace College the German language was entirely dropped from the programs and the minutes of the Germania Verein. The World War brought about a change of name for the Society. The original name involved suggestions and implications distasteful to loyal, red-blooded Americans. The service record of the Society in the war is proof that all imputations were false. It was deemed best, however, to change the name of the Society, and in January, 1918, the name was changed to the Gordian Society. Again, a few years later, it was thought necessary to change the name of the Society, and on October 9, 1922 the name Zeta Kappa was selected. On March 24, 1924 the new name was incorporated under the laws of Ohio.

Since the year of its inception, the history of Zeta Kappa Fraternity has been one of continuous and steady growth, and the Fraternity has inculcated the ideals and traditions of its founders into its present day activities.

In 1859 the Germania Verein was organized on the Baldwin University campus. Improvement of pub I ic speaking was the aim, with German being the official language when the club was organized. The use of the German language in meetings was discontinued at the merger of Baldwin University and German Wallace College in 1913, and a few years later the name was changed to the Gordian Society., The Greek letters Zeta Kappa were adopted in 1922 as the name for this Fraternity. The Zeta Kappa Home is on 49 Beech St. 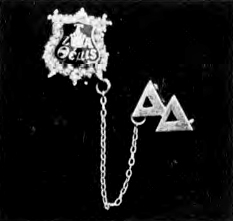 The Zeta Tau Alpha fraternity was founded at Longwood College in Farmville, Virginia by nine girls with the purpose of "intensifying friendship, fostering the spirit of love, creating such sentiments, performing such deeds and molding such opinions as will be conducive to the building up of a purer and nobler womenhood in the world." Since this time Zeta is now the third largest National Panhellenic member. Delta Delta chapter here at Baldwin-Wallace is the 101st chapter and was founded in October, 1957.

During the past year the Zeta's have been very active on campus. They have held several service projects for their philanthropy, Association of Retarded Citizens, including their annual bagel and candy apple sales. The sorority came together during Homecoming by supporting our Homecoming Queen, Barb Davidson, and winning the Breezer Skit. The sisters also won the Intramural flag football and volleyball tournaments in the fall.